We all woke up well rested and ready to start our walk to Ponferrada...a whole 7 K! We didn't start until 8:30, and we all strolled into town by 10, by far our shortest day on the camino. The trip was mainly on sidewalks or paved streets; definately not as scenic as past walks, but it was so short, none of us really had the chance to complain!

It felt so strange to be in a city again--lots of cars, noise, people, busses, traffic lights, and all around hustle and bustle felt forieign to our 25 K-a-day pace of life. We also stood out in the crowd, walking mudcovered and smelly among people walking to work or school. Being in the city is a sharp reminder of the world outside of the camino, your fellow pilgrims are few and far between, and it is rare to hear a "Buen Camino" as you pass.

Ponferrada is a city that developed because of the camino. Even its name is a result of the pilgrimage--after a bridge (pont) built and reinforced with iron (fer) for pilgrims to cross the Sil river. Although the city may have developed because of the camino, the city has no sympathy for its pilgrims--it was impossible to find a kitchen that would open for dinner before 9 pm. (way past our pilgrim bedtime!)

As we winded our way among the narrow streets, a medieval castle emerged from the modern buildings. 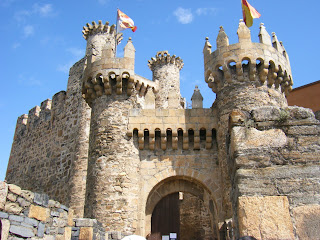 Built in the 13th century, the Templar Castle was built by the Templars in order to protect pilgrims. Now it is a gigantic playground for college students to roam! There are narrow winding stairways to climb up to towers, a series of defense walls, and slits for arrows and later cannons. When the Templar order was disbanded in the 14th century, the castle remained and grew in size and strength. 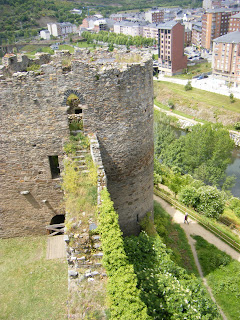 Just as many of the cathedrals we have seen have had layers of archetechtural styles, theTemplar castle's evolution can be tracked by the different layers of stone. Its foundations are of a Roman citadel, then the original castle, and then repairs and additions were added. With each addition, up until the restoration repairs made even today, new construction techniques were used. It was so cool to see how this medieval castle has made it to this day!

The rest of our day was spent seeing the Basilica de la Encina, sleeping, exploring the city, shopping, or eating churros con chocolate--a staple of every sugar-lover's diet. Overall a fantastic and easy day! Buen Camino! 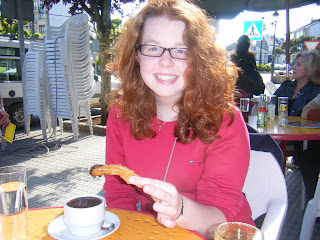