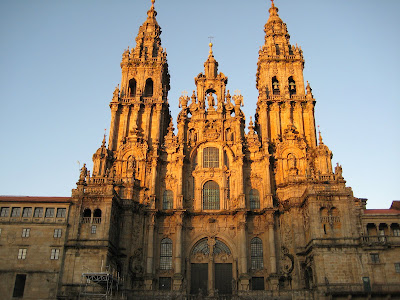 We finally made it to Santiago on June 7, greeted by a photographer, as well as many familiar faces from along the Camino. For many, the walk from Rua (view map) was less arduous than in the previous days -- perhaps due to the anticipation of arriving at our final destination.

On the way, we passed signs announcing our entrance into Santiago; sometimes they were simple roadsigns, but in one case, a last trail-marker appeared — quite ornate in comparison to the dozens we had been passing for weeks now . . . 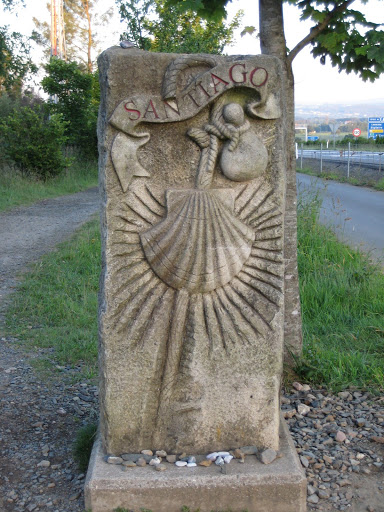 Our first glimpses of the cathedral itself were not collective, however; as usual, most of us arrived separately, or in smaller groups. Yet upon arriving, it soon became difficult to judge exactly what we thought about our experiences throughout the pilgrimage. After my return to the States, for example, many people asked me the same question: "How was it?" — and I was not, and still am not, quite certain how to respond. Just as the Camino unfurled differently for each of us, I find it almost impossible to offer any sort of totalizing description to those who have not (yet) been a pilgrim. What can one say about something where every day seemed so similar, yet so different? — sometimes arduous and painful, other times leisurely and fun? I would argue that in many of our photos, the expressions on our faces do a certain injustice to the depths of our thoughts. 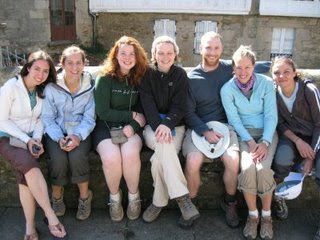 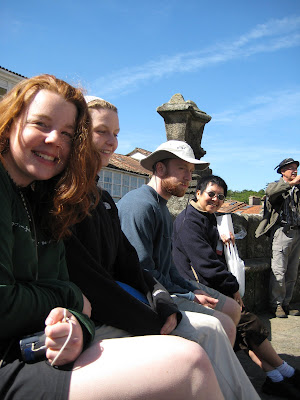 That day we attended the pilgrim's mass offered at the cathedral, where everyone was supremely pleased to discover that the giant censer at Compostela — the botafumeiro — was going to be set in motion that day. Taking several men to lift it, the censer is suspended on ropes in the center of the cathedral, right where the nave crosses the transept.: 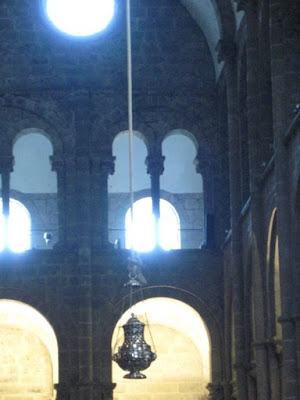 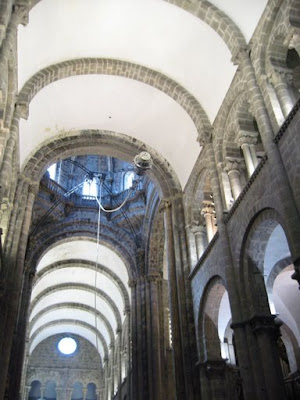 It was such an amazing sight to see it swinging back and forth, almost touching the cathedral's ceiling.
The cathedral itself is a spectacular example of architectural layering. Since it has been in continuous use for hundreds of years, one is able to see several different styles present -- sometimes in the same general area: Romanesque (largely characterized by round arches, or half-barrel vaults), Gothic ("pointed" spires and lancet windows), Renaissance (squared-off, mantel-like embellishments above doors), and Baroque (swirling stone and metal, often decorated with cherubim) -- all intermingled with each other to form a timeless, yet time-indicative structure. Compostela is in many ways like one of the poplar trees found throughout much of Spain, in that one is able to see the newer "bark" growing right around the various, and older "carvings." 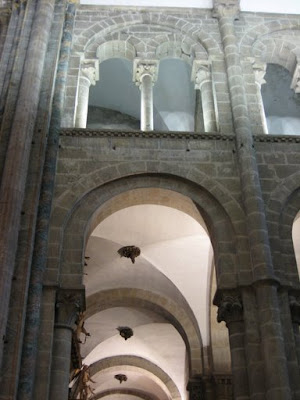 Example of Romanesque features at Compostela 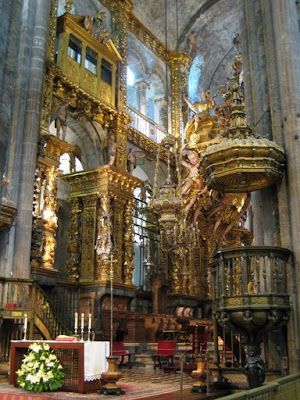 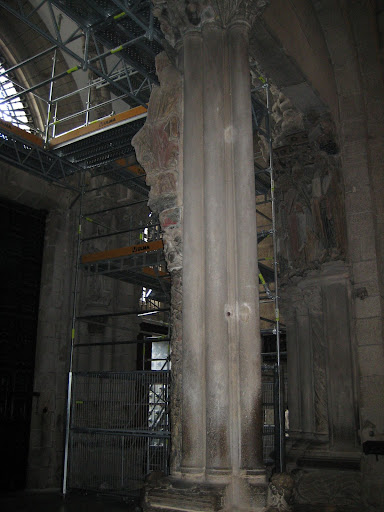 All we could see of the Portico de la Gloria
After touring the rest of the cathedral (unfortunately, the Portico de la Gloria and its surrounding areas were closed for repairs while we were in Santiago), we had a wonderful last meal together at a local restaurant, O Gato Negro. Here are a few photos of what happened to our dishes of raciones: 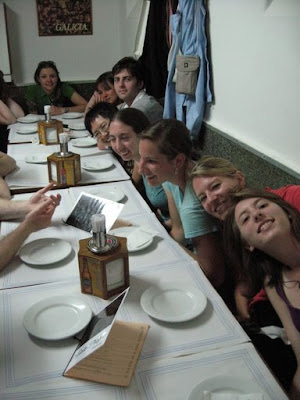 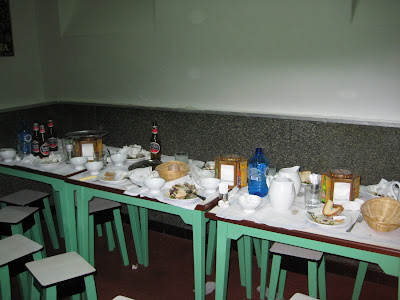 ... And finally, toward the end of the night, we partook of a local beverage in all its fiery goodness: 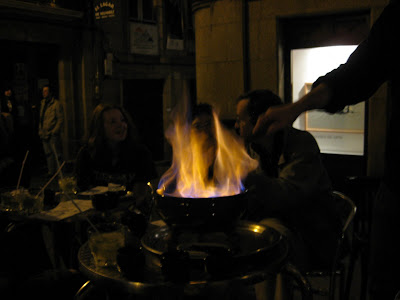 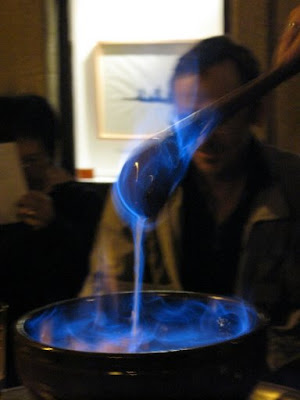 This drink, the "queimada," is made by continually stirring burning alcohol in this large bowl. Before drinking it, all the participants are given a print-out of an incantation of sorts. I won't include any of that here -- it is for you to discover, hopefully in person!

And I thought I knew something about cathedrals... that last blog post read like a history class! Great for you guys, the incense ceremony looks like it was absolutely spectacular. And the queimada ... I hadn't even heard of that, but at that point in our journey, both Paul and I were so broke that I don't know if we could have afforded it anyways.

Just wanted to quickly drop you guys a line to let you know that, from a couple of peregrinos to another group of peregrinos, we couldn't be happier to see that you all made it through the journey not only safe and sound, but from the looks of it, enriched and changed for the better!

I'm about to begin teaching English in Beijing right now, embarking on another adventure. There's no doubt that my time on the Camino set me on the trajectory that I now find myself. I hope that you all have the same luck! Let me give a quick shout out to Kevin, Laura, Scott and Joe to thank them for their participation with POCF and for their efforts--you guys are great!

Thanks for the fantastic reportage. If you want to check out the blog that I'll be maintaining while I'm in China, you can visit it at:

Read about your pilgrimage and blog in the Fordham alumni magazine, had to look the blog up. Fascinating, well done, rich with the insights and perceptions you all experienced as you trekked. It was a pleasure to make the trip with you vicariously - though I'd rather make the pilgrimage myself! Might be a challenge, though, since I'm a Rose Hill grad of '51. Thanks to all of you for sharing the adventure.