After the modern bustle of Ponferrada, the trek to Villafranca was a nice return to the scenic camino to which we´ve grown accustomed. Unfortunately there was a short bit of walking along the road that happened to coincide with hills and sun, but the rest was quite lovely. The majority was on dirt paths surrounded by vineyards, just as I'd imagined it when I researched the Valle del Bierzo. 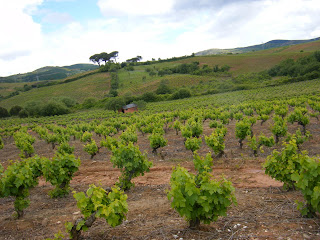 The valley in medieval times was known for its wine and was a region of incessant territorial disputes. Its reknown was lost to Spain until it was given DO status in 1985. The wine today, as in the middle ages, is influenced by the passing peregrinos who enjoy vino tinto with their menu del dia.

Villafranca itself is a small village with a few churches, plazas, and winding streets with traditional architecture. Like Ponferrada, Villafranca is a traditional camino town. It was founded by monks from the French monastery at Cluny in 1070 to care for the passing peregrinos. Many pilgrims, especially French, settled in the town giving it its name ¨Villa-Francorum,¨ or village of Franks. Villafranca is most notably for the Door of Forgiveness on the northern side of the Church of Santiago. 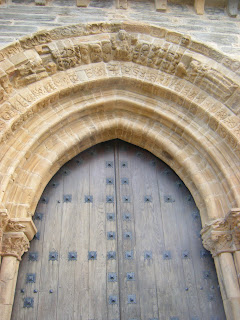 This 12th century Romanesque church is the only place along the Camino del Santiago where ill or injured pilgrims could receive the same spiritual benefits as if they´d reached Santiago. We also looked at the Castle of the Marquis and Calle del Agua. The castle, which was never used as a fortification, has a basic square plan with a tower at each corner topped with blue slate. 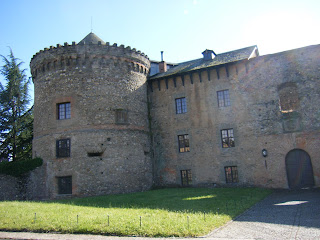 We were unable to enter it because the castle is still a private residence currently occupied by the local marquisa. The Calle del Agua, or ¨Water Street,¨ was the sight of the houses of the local elite. The narrow street has traditional medieval architecture complete with carvings of the families´ coat of arms. 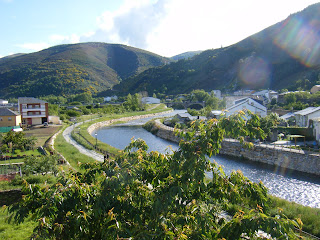 Overall, Villafranca was an enjoyable experience. After exploring the town we all met in the largest room and enjoyed a communal meal of mainly bread, cheese and sausage. And of course the night wasn´t complete until we´d played a few rounds of mafia.

Buen Camino!
-Ariana Jones
Posted by Richard at 7:31 AM