O'Cebreiro. The name that strikes fear in the hearts of all Peregrinos. From the beginning of the Camino we all dreaded the day when we would trek up to the 1,293km high summit of O'Cebriero. It was the longest walk we had done so far, 30km, and we wondered whether our poor blistered feet could handle such a challenge.

It was an unusual walk in that we ended up seperating off into three different groups. One group took the traditional, well-trodden path, another group (accidentally) took the bike path, while a third group of brave souls decided that they would take the more scenic, though significantly less travelled path, to reach to summit. 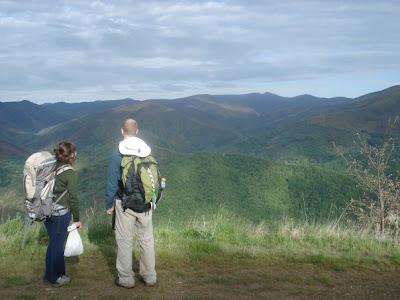 But in the end, though many different paths were taken, there were two things everyone said in common, the trek was a challenge but the scenery was beautiful. 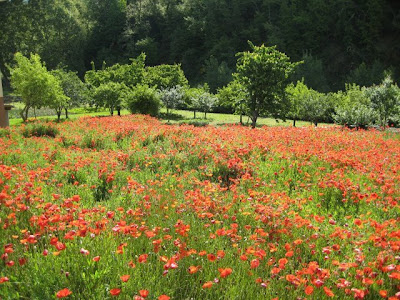 The first 12km of the walk felt like a breeze. It was all flat road and we quickly made it to our first cafe stop (and first cafe con leche) of the day. Sitting at the bar sipping our cafe con leches we already felt like we'd accomplished so much and joked about how O'Cebreriro was not as bad as everyone made it seem. Little did we know, things would get so much harder from there.

As we continued on, we kept hiking up winding paths that always inevitably spiraled downwards again and we got more and more demoralized knowing that every step downwards was another step we'd be taking once we started climbing up the mountain. As we kept ascending, the view became more and more gorgeous. We walked on winding paths right along the mountain and we could see the other mountains beside us, and the valley far below. But as we climbed higher and higher we became more and more enveloped in the mists surrounding the mountain. Soon enough we were completely surrounded and could see no more than 20ft in any direction. It was amazingly beautiful but also very disconcerting. If someone you were walking with got just a little bit ahead they would just dissapear into the mist in front of you, and it felt like there could be a whole city lying right in front of you but you wouldn't be able to see it. It felt like you were in a completely different world, something out of a myth or a fairy tale. It especially reminded me of one of my favorite novels, "The Mists of Avalon," where the mythical island of Arthurian legend would magically appear out of the mists. It was an appropriate feeling since O'Cebriero is actually a Celtic town. It was the most spectacular moment when, after feeling like we were hopelessly lost in the mists, we saw Dr. Gyug materialize in front of us along while the whole town of O'Cebriero. We were rescued and promptly hurried off to our menu del dia. While there, we learned the fate of the daring group and discovered that they ended up 12km off the Camino due to the misguided directions of a villager. They eventually walked in having had to take a cab from the town they ended up in. 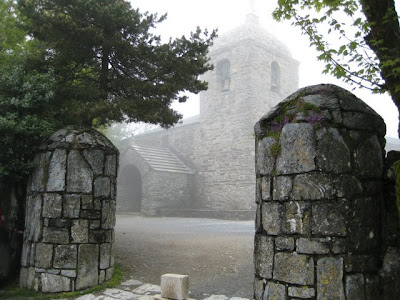 O'Cebriero is a tiny town with one major possession. At their church, Santa Maria, they believe they have the Holy Grail. A miracle was supposed to have taken place at that church in the 14th century. During the consecration, a peasant came into the church out of a snowstorm in order to hear mass. The priest criticized him for coming so far just for a little bread and wine. At that vrey moment the bread and wine were literally turned into flesh and blood. The miracle was confirmed by Pope Innocent VIII in 1487.

When we went into the church to see the grail, it was a little dissapointing. The grail, along with an ancient paten, were held in a glass case up on a pedestal. It was probably just the presentation but the grail didn´t feel remotely as impressive as it should have. Perhaps we had just made too many Indiana Jones and Monty Python jokes throughout the day that no one was able to take it seriously! That, or everyone was too busy inspecting the stamps in their credencials. The stamp for the church took up at least five spots and most of us were really excited to see so many spots taken up.

After touring the town we all took cabs to our hostel which was outside O'Cebriero, in Pedrafida. We all felt very strange being in a car after so long. Along the way we saw some pilgrims walking and I really wanted to lean out the window and shout "Buen Camino!"

It was a long and exhausting day. But after surviving O'Cebriero we felt like we could survive anything.

Indiana Jones had it easy. Bravo to all of you! You showed how the journey is often more rewarding than whatever the destination has to offer.
By the way, does Dan Brown know about this?

I had to comment on the O Cebreiro leg of the journey, which was also one of the trickiest, longest, and most beautiful legs of the pilgrimage for Paul and I. How amazing was it when you finally passed over the mountains and into Galicia, and all of the sudden everything looks like Ireland? The walk up through the Montes de Leon is brutal, though, but the view to the south is absolutely stunning--those villages built into the mountainside, the waterfalls you can see off in the distance...

I find myself transported back to that day reading your post, and the pictures are fantastic! I remember not long ago posting myself on this leg of the journey once we arrived in Triacastela ... I know it's a long time past at this point, but cheers on making it all the way to O Cebreiro that day, detours and all!