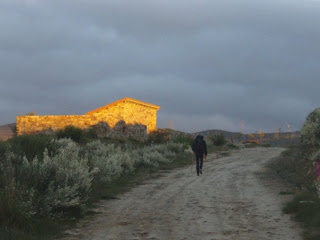 Despite the cold and the rain on this fifth day of the walking, we all managed to come out with a great experience. We left Rabanal off pre-bought or albergue ordered breakfasts, and proceded to make our ways up Monte Irago. The air was cool and the flowers were lovely. The smell was wonderful.

A short while into the walk, the Cruz del Ferro, a mysterious yet well known site awaits. It is a cross of iron, atop a huge pile of stones. Legend is that it goes back centuries and that the first pilgrims to Santiago de Compostela left stones at the base to represent their journey. In all likelihood, the place was a Celtic shrine, and the Romans left a stone pile marker for the mountain pass, and then Christians adopted the site as well. 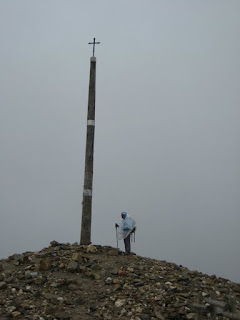 In any case, the Cruz del Ferro is a milestone in the modern pilgrimage. Modern pilgrims bring a rock, either from someplace significant or from Monte Irago itself. Some decorate them. The stones represent the burden they bear. 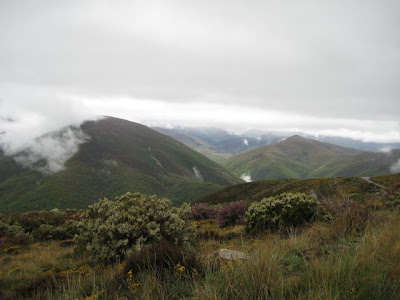 Then we moved on up and over and down the mountains. The day was cold and there were lots of puddles, but also lots of gorgeous wildflowers, and cows and even sheep!

One of my best experiences that day was Manjaharin, an alburgue-town which provides hots beverages and those ever present cookies we all eat to pilgrims. My hands were very cold, but the woman warmed up my hands, made me mint tea, and gave me gloves. She was so sweet. I gave her a long hug. The man, who thought he was a Templar, offered me (what I assumed were) courage-boosting words.

Another peregrina I had met the day before, Pilar and I helped each other get over the huge puddles. Later, when the sun came out, and we were descending, a German man and I talked to each other in a mix of our two languages, and arrived in Molinaseca together. We also figured out a tricky part when the road sign seemed to be mixed up.

Everyone else has told me how great of a day they had as well - it was a great walk, they really enjoyed the company they were in, they had some great talks, and so on. 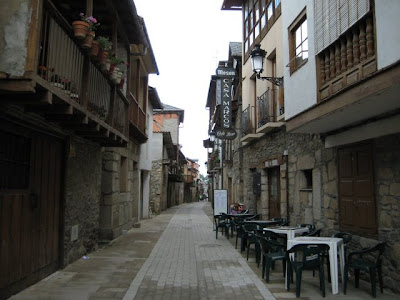 Molinaseca was a cute little tourist and holiday town. Everything seemed to be closed, but our hotel was very nice. It provided towels! For someone who does not have one this is a great luxury. Also, the owner of the house turned on the heat, twice. Both of these things lead to one of the most pleasant nights. Also, great times were had at the very long table, at which a picnic of bread, ham, cheese, olives, fruit and wine was had, and then fascinating games of mafia were played.

The whole day has the common rosy warm glow of cozy satisfaction about it.

Buen Camino! And remember to ventilate :)