Because our walk from Palas Do Rei to Melide was a relatively short one, Professor Gyug planned for us to walk a much longer way the following day, over 30 km to a hostel in a place called Rua. Most of us woke up very early, while it was still dark and we walked the first stretch of the Camino, off the road and onto a forest trail without much light guiding us. 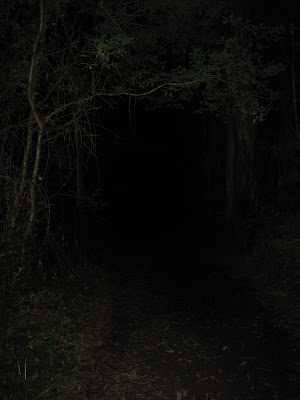 We strained to see the yellow arrows for a short while. As the sun rose into its place in the sky the Camino began to come alive with its many wild sounds and the footsteps of other pilgrims. For me this day was filled with anticipation and mixed emotions. This would be our last day of walking before our march into the Plaza del Obradoiro, where Santiago’s enormous cathedral awaited our arrival.
The road to Rua was a mixture of roadside walking and trail-treking. It was a good example of the diverse terrain that the Camino is known for. We walked on dirt trails and came across a beautiful horse that walked up to us slowly and carefully popped its head through the barbwire fence that separated us on the trail from him among the trees. My friends, Scott, Mari, and I stood there for a minute and looked at him. We realized he probably wanted food, but we had none so we moved on. 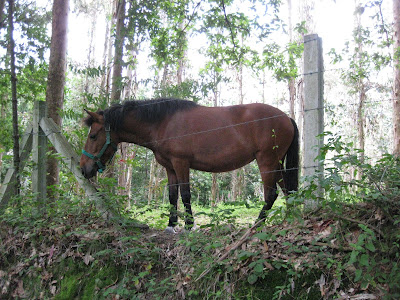 The trail soon met the road and we walked through neighborhoods and past cars. There were a few bars along the way to grab a café con leche or some tea. Throughout the morning, we past many kilometer markers and each time we passed one it reminded us how close we were to the end. I know that many in our group were ready to reach Santiago, but if they felt any of the mixed emotions that I was feeling this particular morning, they might have also wished that the journey didn’t have to end so soon. Our group had been very strong thus far, and no major injuries had set us back. We were all sore, and tired, some of us ripe with blisters and others with sour joints and tendonitis, yet we had all made it so far and the thought of going back to our lives in New York and elsewhere for the rest of the summer were nestling their way into our minds. I began to feel reality and my usual urban existence closing in on me.

In one of the major towns we past through on our way to Rua a photographer from our university's magazine was there to take pictures of us for an article about our journey. He walked with us for a while as we exited the town and climbed up into the low hills where there were some incredible views of the valley below. 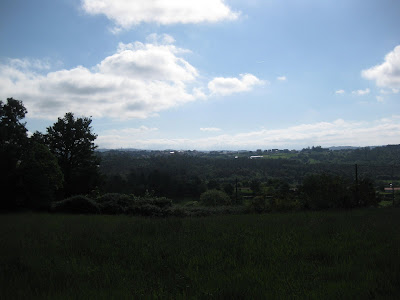 It was a long day, but we didn’t push ourselves too hard. It was a pleasant walk and much of it was on a wide path like the one below. For much of the trek we could see for miles around us. 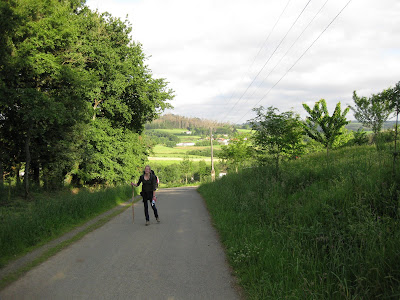 We past many farms and fields where men and women worked their land. Throughout my journey on the Camino I was impressed with the many elderly people working outside. We encountered many individuals working in their small gardens or cutting back their large fields like this lady (below) we past on our way to Rua. 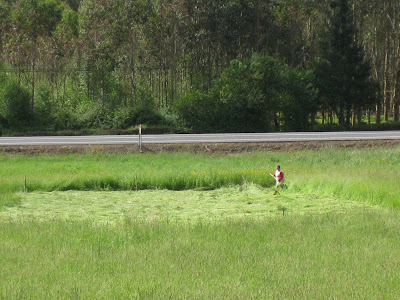 The presence of self-sustainability in the small villages we walked through was something that not only impressed me, but also reminded me that much of the world is not at all like New York City where we Fordham pilgrims call home. There are still places where people grow their own food and work each day at tending their land to feed their families. I found that this relationship to the earth is something missing for many people living modern, urban lives, including myself. As I walked I thought of the transcendentalists like Emerson and Thoreau who emphasized simplicity and the importance of man’s relation to nature. Emerson wrote in his book titled Nature that, “every hour and season yields its tribute of delight: for every hour and change corresponds to a different state of mind, from breathless noon to grimmest midnight.” I think many of us have lost sight of that intrinsic connection with nature, a connection that affects our state of mind and our senses whether we realize it or not.


When we passed the 20-kilometer mark we were exhausted and Rua lies on the 19-kilometer mark, and for me that last kilometer was a rough one because I was physically drained. The path left the main road and onto another trail surrounded by trees. 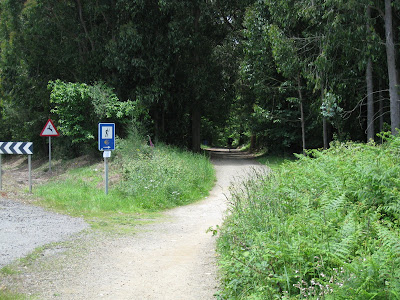 When we all finally reached Rua, we found that we were staying at one of the most comfortable places of our whole trip. There wasn’t much to do in Rua, but our hotel had a very nice restaurant and bar where we hung out, had some bocadillos and refreshments. The hotel had a large yard with a table in the middle of it so we got to sit out on the grass and talk as a group while our wet clothes dried on nearby clotheslines. It was a very relaxing afternoon and evening. Everyone went to sleep fairly early in preparation for our final day of walking. We were almost there and it felt great!

hi Richard!
I'm doing camino in a few weeks and one of the stretches is from Melida to Rua, do you remember what the name of your hostel there was? It doesn't seem to come up on the link, but it sounds great.